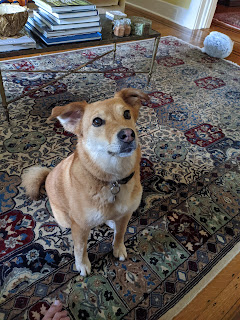 17 days, 8 cities, 3,400 miles later, and we are home again. Lulu was very happy to see us, even though she was very well taken care of by our friends. I think she will be missing our vacation as much as we did. But for now she is content to have us home. It was great fun to see graffiti that came from WWII, and more images (below) that came from thousands of years before that. We met people at the peak of their careers, choosing Marfa as a place to be while they make their bones in the journalism or art worlds. I hope they don't feel locked down. I met an old friend who lived out his career as what we used to call a Tramp Miner, and is now retired to Silver City, NM, a place I almost moved to when I was 24. We saw amazing things that you read about your whole life, like the Petrified Forest, and realize that yes, you should see things like this at least once. Or twice There are amazing things that get preserved in a county that gets no rain. Like a thousand year old meteor crater
2 comments
Read more 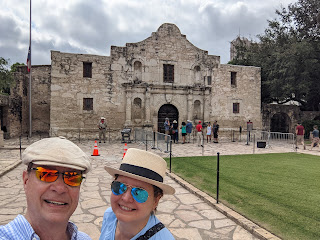 If you live in Texas, and you hear San Antonio, you think of The Alamo. (maybe even if you are NOT from Texas) So here we are. It is much smaller than you think it should be. But of course, after 185 years of being managed and mis-managed by the army, the State of Texas, and the Daughters of the Republic of Texas, the actual grounds of the mission now include a Ripley's Believe It Or Not and a Madam Tussaud's Wax Museum. And don't forget the Tee Shirt Shops (none selling Tee Shirts of Zapata or Pancho Villa) But it is still an iconic place. Even if the remains of the heros of the battle are interred a couple of miles away at the San Fernando cathedral, across from the Bexar County Courthouse. There is some good history in San Antonio, and we enjoyed it quite a bit. The VFW hall Me, in front of San Antonio, himself. The Habsburg Crest as the keystone of the Governor's Mansion: There is a statue of a Conquistador in front of the Governor's Mansion, which was probably
Post a Comment
Read more
More posts